* In case of any delay in receiving the OTP, you may verify it later. Please proceed without verification.

Enter your City name or Pincode

Ateli is a small city located in Nangal Tehsil in Mahendragarh district of Haryana State in India. The city, which belongs to Gurgaon division, is situated 20 km towards east from district head quarters Narnaul. Ateli city is a place situated in the border of Rewari district and Mahendragarh district. It is also near to the Rajasthan state border, Alwar. 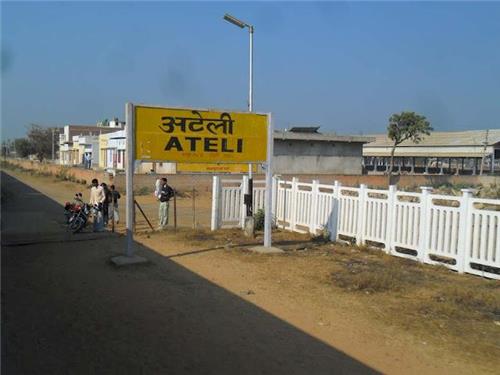 Ateli is located at 28.1°N 76.28°E with an average elevation of 299 metres. It is surrounded by Khol at Rewari Tehsil towards east, Narnaul Tehsil towards west, Nimrana Tehsil towards south and Mahendragarh Tehsil towards north. The nearby cities to Ateli are Narnaul, Mahendragarh, Bawal and Rewari. The villages near to Ateli are Uninda, Saidpur, Nangal, Neerpur an Salimpur. Hindi and Punjabi are the most common language used in Ateli. The highest temperature in Ateli is experienced in between March and May. The city experiences 30°C to 39°C during this period. The place gets rain during monsoon season. November, December and January are the months when the place has minimum lowest temperature, which is in between 8°C to 24°C. The climate in Ateli is suitable for various crops like wheat, mustard, barley, gram, cotton, bajra and Guar etc.

Haryana roadway is one of the major commercial department of Haryana Government. It provides basic transport facilities across the state to the people. Haryana roadway has 24 depots an Narnaul depot is one among them. It provides efficient an convenient services to many major cities, towns and villages of the state. It also conducts intra state routes like Ajmer, Jaipur, Panipat, Sirsa, Ludhiana, Jhunjhunu, Sikar etc. The bus stands that come under jurisdiction of this this epots are Narnaul, Mohindergarh, Kanina an Ateli. Time tables of the concerned routes are displayed in stands.

Even though Ateli is comparatively a small city, there are many tourist places around the city where many people visit. Narnaul, Nuh, Manesar and Alwar are nearby tourist destinations to Ateli. Agroha, in Bahaurgarh, Hissar in Bahadurgarh, Surajkund crafts Mela in Faridabad, Kartik Cultural Festival in Faridabad, Stellar Children’s museum in Gurgaon, Fun an Food amusement park in Gurgaon etc are some of the other famous tourist attractions around Ateli.

Social service is a vast sector, which includes a broad range of disciplines, knowledge and skills focused toward enhancing the well-being of people both collectively and individually. As there are many issues related in various sectors of a society like poverty, discrimination, education, health and hygiene etc. we can see wide variety of social service organizations that aim to accomplish all these goals. Gramin Utham Avam Jan Kalyan Samiti is a social service organization in Ateli that works on many of such fields to aid the people in and around the city.

The development of a city will be productive, only when it provides basic services to its residents. There is no use of big shopping complexes, airports or multiplex theaters, if the authorities fail to provide the basic facilities that are essential for the smooth and comfortable living of the people. Even though Ateli is a small and developing city, the people here enjoy the basic and essential utilities and services like courier office, post office and banks etc.

Importance of courier services is increasing everywhere with the growth and development in business sector. It is one of the safest methods to send things from one place to another. The famous courier services like professional, Pushpak, DTDC and Bluedart etc have many branches most of the important cities of India that ensure more efficient services all over the country.

The modern inventions in communication like mobile phone and internet decreases the significances of post offices. It is quite natural that people will be attracted to more smart and efficient ways. Now, post offices are mainly used to send greeting cards and invitation cards. However, the official communications and the messages from government still reach to the people through post offices.

As Ateli is stll not that much developed thats a reason why you cab find only a few nationalized banks like Pubnjab National Bank and State Bank of India branches here. People here are familiar with the new banking services like internet banking and mobile banking etc. However, the presence of a few bank branches certainly has helped to create a saving habit among the local people here.

Comments / Discussion Board - About Ateli